The use of industrial induction heaters for magnetic hyperthermia research.

The use of industrial induction heaters for magnetic hyperthermia research.

The use of industrial induction heaters adapted for laboratory use instead of devices specifically designed for magnetic hyperthermia research may appear to be a cost-effective way to equip a laboratory. However, there are a number of potential problems with devices with an industrial heritage, typically, a limited frequency range restricts the exploration of the optimal complex susceptibility parameters.
Other considerations include:

1.    One of the major problems that could be encountered with an industrial device is the power modulation and shape of the ac magnetic wave form. Some forms of power modulation can result in a non-continuous irradiation of the sample, where for example when the power is set to 50% of the maximum value, the power is turned off for 50% of the time rather than the amplitude being reduced by 50%. This on-off pulsing is illustrated below in Fig. 1 where the signal from an induction heater hot plate, where the power setting is less than full power, is analysed. The ‘gaps’ in the signal result from the output power being turned off. 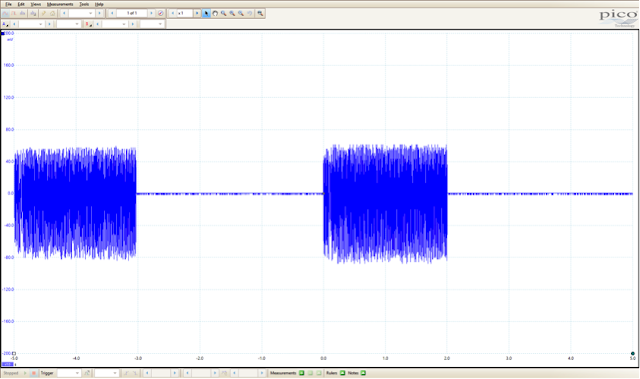 Some heaters may exhibit both on-off pulsing for part of their output range and then, at the higher output range, change to a mechanism of increasing the current to the coil, as in some laboratory induction heaters.

In addition the waveform of some heaters may not be purely sinusoidal. The output from the above induction heater is shown below. Fig. 2 is effectively zooming in on a small section of Fig. 1. 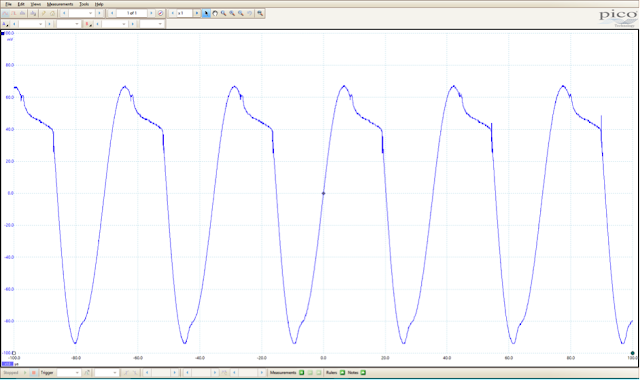 Fig. 2 shows that the RF waveform is badly distorted with the asymmetric nature of the distortion indicating a single-ended, variable pulse duration excitation of a parallel-tuned resonant L-C circuit. The distorted waveform is rich in harmonics of the nominal 27kHz operating frequency which are shown below in Fig. 3. 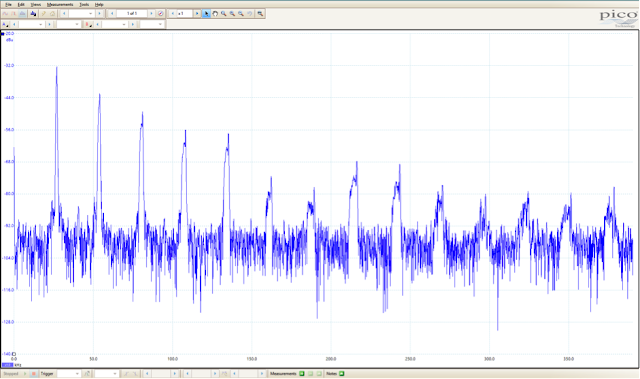 The distorted waveform make it difficult to calculate the heating effectiveness of the irradiation since this is given by the root mean square (rms) value of the waveform amplitude. For a sine wave this is the peak amplitude value divided by √2. Using this calculation for a distorted sine waveform is an approximation and will introduce errors into calculations; not ideal for scientific measurement.
In addition, the harmonics displayed in Fig. 3 spread the heating power to a number of different wavelengths and thus there is further uncertainty in SAR and SLP etc. calculations.

2.   Increased exposure of surroundings and personnel to magnetic field radiation due to exposed coils. Most industrial devices use exposed coils whereas most scientific devices have coils in enclosures that reduce emitted radiation. As well as exposing other instrumentation to potentially damaging radiation, the radiation can also disturb the operation of laboratory electronic devices. A non-enclosed sample coil is also potentially exposed to increased fluctuations in the surrounding temperature due to the opening of doors, fans and open windows etc.

3.   The sample homogeneity may be compromised by the coil geometry. Industrial heaters are designed to stimulate eddy currents in metallic ‘work-pieces’ and consequently are not designed to provide a homogenous field; the waveform or field is not important so long as the desired temperature is achieved. Coils are often not close-wound, exhibiting gaps between windings  resulting in compromised field homogeneity; not a problem for the intended industrial purpose, but a potential problem when trying to locate scientific samples in a region of homogeneous magnetic field. Coils may also be under-square, where the coil length is less than the diameter. An under-square coil further reduces the homogenous volume to a small location at the centre of the coil.

4.   The coils are often unsupported which may result in a change in coil geometry over time, leading to a change in the homogenous field location, a change in frequency and a change in field strength. Obviously for scientific research a device with reproducible performance is required. Consistently locating samples within industrial coils can also present challenges.

The induction hob works perfectly well at performing its intended function. It causes the pan (with a ferro-magnetic base insert) to become hot in a controllable manner. Further, it is highly efficient, and intrinsically safer than gas or electric ring hobs.It demonstrates that the primary objective is achieved in a manner consistent with cost-effective manufacturing techniques.Similar constraints and techniques apply to RF induction heating apparatus intended for industrial metal treatment.Some of these compromises and limitations may be carried through to magnetic hyperthermia research instruments which are derived from industrial metal treatment machines. In the worst case, a displayed ‘average’ figure for magnetic field may be deduced from periodic bursts of higher amplitude, envelope-modulated RF, with distorted RF field waveforms, rich in unwanted frequencies.

A professional purpose-built hyperthermia research instrument should produce a clean sinusoidal waveform at the intended operation frequency. The RF magnetic field should be present continuously, and at constant amplitude, as selected by the user.